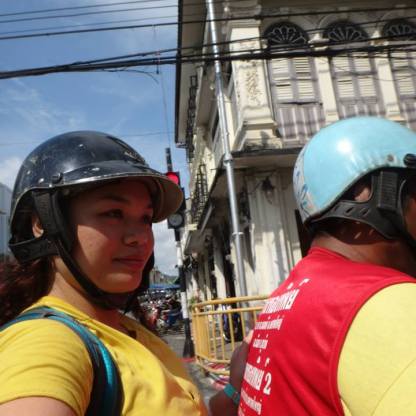 Continuation from Thailand: Where It All Began (Part 1) Read the first part here

I am right. Patong will not offer that much to me because I don’t want to have more of night life. KL gives me that every single time so I am right about escaping my Phuket escape. I took the Songthaew, a public transport that look a lot like our local Philippine jeepney, to Phuket Town. From there, I hitchhiked my way to the terminal where I will be taking the minivan which will bring me to Koh Lanta in Krabi. I ended up giving the driver 100 Baht because my bag, like me, was very heavy too. I was able to see the entire town that way. Instead of taking the three and a half hour speed boat (3500 Baht or 120 USD) to Krabi I opted for the minivan (280 Baht or 8.97 USD). This is how the locals travel from Phuket to Krabi. Though it ate up almost twelve hours of my time, I didn’t regret doing it. I took naps in between sightseeing. Each time, I’d wake up surrounded by so much green. I don’t know how I was able to tolerate it, but I don’t mind doing it again. 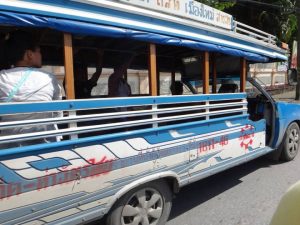 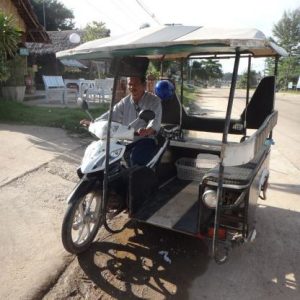 I was smashed when I reached my hotel. I was greeted by the staff with orange juice and wet face towels to freshen up. I can’t help but smile at them in my shitty glory. It was like I reached heaven and they definitely seemed like the angels. 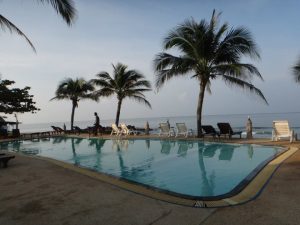 I knew it was what I wanted when I heard the crickets singing. It has been so long since I last heard that familiar music; it felt home. That long trip was worth it. The internet connection was weak but I didn’t mind. I need social media detox anyway. The beach was less than two-minute walk from the hotel and there was a bar near the pool too. 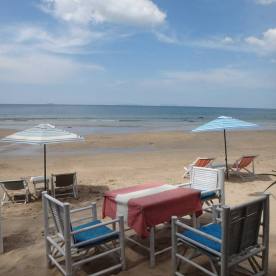 I showered quickly and changed to a comfortable dress. I wanted to walk around a bit and to have dinner too. Not so far from the hotel was a nice restaurant. I immediately ordered Thai fired err fried rice. 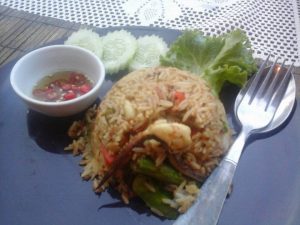 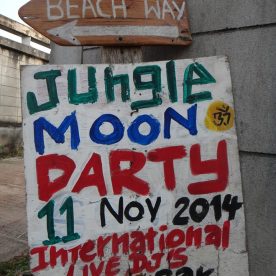 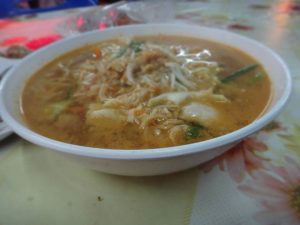 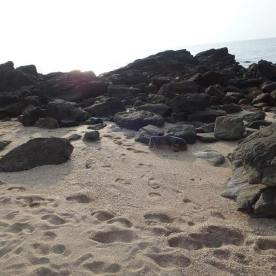 “Oh yeah! I love spicy soooo much!” I replied smiling wider than I wanted to to emphasize that I am no baby when it comes to spicy food. Even before moving to Malaysia where it is normal to see chopped chili as food toppings. 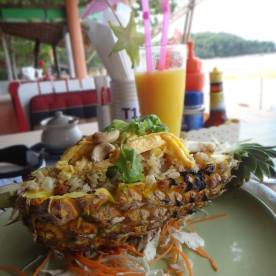 My order came and it tasted like it was delivered from heaven. On my second spoon of fried rice, I felt a hot line going up my nostrils and my mouth and tongue were feeling as if I bit a burning charcoal before they turned a bit numb. I tasted danger but I can’t act silly. I declared my love for chili aloud and reacting obnoxiously is a shame. I chose to panic like a winner but I know my face was red and my eyes were starting to water. I saw cucumbers slices on the side of my plate, grabbed two pieces and shoved them inside my mouth.

Wrong move! As I quickly chewed the cucumbers, the watery extract immediately spread the burning inside my mouth. I wanted to cry. The waiter came to ask if everything was alright. Of course I can’t say that I might need to be rushed to the nearest hospital. So with a slightly flared nostrils and teary eyes, I said everything is alright. I asked if they have dessert but he didn’t understand.

“Sugar? You have?” I asked in desperation and he went away. After split second he was back holding a dessert menu. I didn’t know where my point finger landed and he left. I was wondering how long he will be able to bring my order but I continued to eat my chili rice until my mouth adjusted to the spiciness which took longer than I have anticipated.

This was even spicier than the ones I had in Phuket. The French owner of the first Thai restaurant where I ate was right. Phuket isn’t so Thailand anymore due to the influx of tourists it receives every single day and most of these tourists can’t eat that spicy so flavor needs to be adjusted accordingly. But here in Koh Lanta, it is a different story. I wasn’t prepared for their definition of spicy. I know I needed to rest after the long trip after the meal, but it felt like I just warmed up for a 10k marathon.

My dessert came and I swear I slurped it like a maniac. It was a coconut flavored ice cream. Now my mouth felt more confused. Hot and spicy then cold. Normally I complain about being brainfreezed, but this time, my brain wouldn’t be able to detect the coldness of the dessert. The waiter was looking at me and I just smiled a little. I know what he was thinking. I signaled for the bill.

He came back with the bill and I gave him a thumbs up for the food then started walking back to the hotel. It was a little bit dark when I reached the hotel and the silence was a bit eerie. I was just not yet ready for all of this. I was in paradise. The Bangladeshi hotel receptionist told me that I am the first Filipino customer and that their chef is a Filipino too. This came as a surprise for me given how remote the place was. I went back to my room to nap.

It was already dark when I got up from the bed. I went out of the room intending to go for a walk in the reception was the Bangladeshi receptionist and the Filipino Chef. They both looked and smiled at me. Brief introductions were made and he volunteered to show me around. I had a tour guide. He even taught me how to ride the motorbike which was a massive failure. I was more scared of wrecking his eardrums. I was just screaming and laughing the entire time as if I was being tickled.

We bought beers from a local store and he told me where to get cheaper meals. He said the hotel is looking for a female receptionist and he can tell the owner to hire me if I want. I just was floored when I heard the salary. I can’t. Yet. Had I not been so greedy for a higher paying job I would have accepted the offer. Heaven was an understatement for that place. I spent my Krabi days running by the beach in the morning to catch the sunrise, basking under the sun, swimming, and drinking Singha and Chang any time of the day. Oh! and eat, eat and eat some more! This time, I had adjusted to the spiciness of everything. I would sometimes wonder how I ended up on the sand when I know I was on the lounger.

On my second to the last day, I booked a four-island tour and was amazed buy how beautiful and untouched those islands are.

“If you want photos, just ask.” A French traveler told me. To be honest, I was a bit shy to take tons of selfies because other tourists weren’t doing it so I decided to just do it like how they are doing it. Enjoy the moment. Live a little. 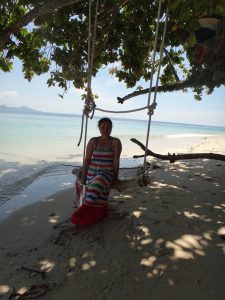 I met a couple from London on my last night. They were also staying in the hotel where I was staying. We decided to go for dinner and had beers together. It was also their last night and they will head to Phuket and will fly back to London after four days. They have been traveling for nearly two months now. I know how they feel. I didn’t want to leave the place neither. Few beers and cocktails later, we called it a night, walked back to the hotel together and wished each other safe travels. 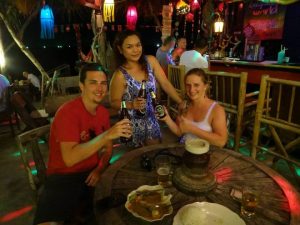 I drifted to a dreamless sleep. How I was able to sleep when I was just napping by the beach, drinking beers and eating the whole time I was there, I honestly have no idea because in real life, even if I have worked all day and worked out at night, sleep was still stingy. 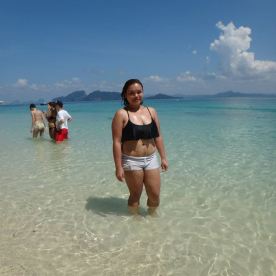 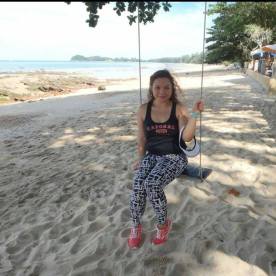 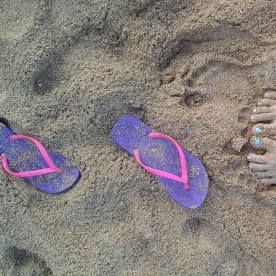 Next morning I woke up and I can’t believe that it was my last day on this island. I packed my stuff and went out for a last swim and last feel of the sea. I took tuktuk to bring me to the terminal. I took the same route back to Phuket.

My flight was the next morning. I booked another hotel nearer the airport. I spent my last night enjoying more of Patong and Bangla Road. My flight was at 6 am and I hired hotel car to take me to the airport. It was so lonely to pack. By 5 am, I was surprised to see a dark blue limo driven by a lady. I nearly jumped when she told me to get in. Just 800 Baht (25 USD) for a posh hotel transfer. What did I do to be this lucky? This lady owns the hotel and since it was too early, no driver was available. She drove me to the airport instead.

I came back to Malaysia feeling like a different person. Something that I can’t put a name on changed. I am braver than what I gave myself credit for. I had fun alone and it was totally okay. I was again ready to face Singaporeans’ wrath (Malaysians’, Indians’, Europeans’, Americans’ or whoever was living in Singapore) again. I’m calmer than I’ve ever been. As of the moment that is.

Now, every time I mention Koh Lanta, I feel my heart warming up and my lips forming a relaxed and blissful smile. ahh! No words are enough to describe how happy and content I was during my stay there. Memorable is a mild term for it.

Koh Lanta made me lost track of the days and I didn’t realize any sooner. I just wanted to freeze time. Ahh! if I don’t need to pay rent nor have to have money for food, I will just lay on the sand forever. It’s really hard to accept the fact that I have to return to the real world this soon. It’s okay. This is not the last.

Why did I start doing this late? Why was I so scared to do things alone? Why did I have to spend on material things rather than save them for more of this? What took me so long to do this? This is just the beginning and I will make sure of that. Expat Diaries: In Malaysia, It’s Never Too Late to Dream a New Dream.

10 Things That Changed Since I Lived Abroad.