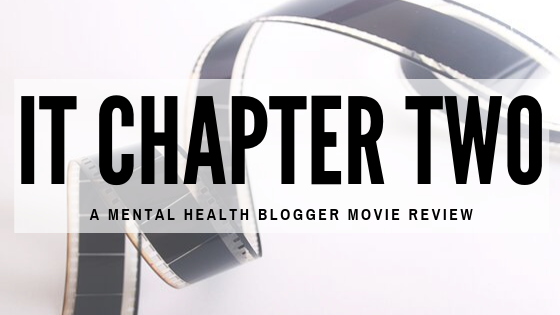 I was tempted to brush up on Stephen King´s life and works while I write this but didn’t.

I mean, who doesn’t know Stephen King but all that I could think of was the movie and how the second installment made me feel.

I might have read his books when I was younger but it might be the same reason why I didn’t really appreciate Paulo Coelho’s books earlier. It could be that I also felt that I didn’t have the profound education required to read between its lines to be able to get the message that lies behind its fictional facade.

Plus, even if I have seen the first part, I honestly couldn’t recall so much especially now that my entire attention is focused on non-fiction and self help works.

My new self is focused on personal development. I am just a poor village girl who is hungry and greedy for growth.

Read also:The Exact 10 Steps I Took to Kill the Old Me: A Self-Reinvention

Yesterday was one of those rare moments where I needed to set my hippie self aside, wear my only red pair of heels and sit in a fancy Restaurant with my cousins to celebrate my uncle’s 70th birthday brunch.

While eating, my youngest cousin loudly asked if we want to watch a movie later in the evening. I got giddy. It was a good idea since I didn’t have anything planned aside from resting. Only to be a little worried that “It Part 2” was what she had in mind.

My boyfriend who was seated on my left didn’t hide his amusement and didn’t let the opportunity to mock me slide by teasing me in front of everyone for my tendency to just scream when watching horror movies the whole time.

Now I realized why we didn’t watch it earlier as planned. He didn’t really want to watch it with me and he was not kidding when he told me that. German!

I long stopped watching horror and thriller movies because I tend to really feel what the movie wants its audience to feel in a very exaggerated level.

A kind of level that prevents me to sleep and properly act like a normal human being. I must say that it wasn’t like this all the time. It was only during my lowest low.

Though I didn’t want to watch it but my gut didn’t protest so with the flow off I went.

The celebratotial brunch ended and we all headed home to recover from public display of gluttony and excessive sweets consumption that didn’t allow me to really nap and rest. I was hyper until minutes before we drove to the cinemas.

We all gathered in the lobby to secure the tickets and snacks despite the heavy brunch.

For a second I hesitated to buy snacks for the fear of what
the others would say about how much I ate but I didn’t care. If anything, no one went inside the cinemas empty-handed.

Genourmous popcorn bags and huge cups of sodas were present not to the mention nachos.

Atter the mandatoy selfies and group photos, we merrily went inside and looked for our seats. I could sense the hushed tension in the air. We couldn’t just admit it but we were all terrified. At least the girls were but said nothing anymore for the fun of doing it together.

I braced myeself and opened my nacho box the moment I felt comfortable. I know I wanted to eat before the movie started to avoid choking in case I needed to let a loud scream out in the middle of chewing. I also didn’t want to trouble anyone in case I send my nachos flying in the air if I couldn’t control my reflexes.

The movie started and I focused on trying to recall what happened in the first installment so I can fully understand the second. I stopped when my memory failed me. I didn’t want to also not understand the new one.

“Can excessive depressive episodes shrink the size of my brain?” I couldn’t help but silently ask myself.

You see even in the middle of the movie, all the tabs inside my head were still open.

The movie continued and when my screams subsided, I started to yawn.

I was reminded that it was a three-hour movie.

For a horror film, I found it agonizingly long and boring.

In the middle of one of those stiffled yawns, something inside me clicked all of a sudden and every scene started making sense. Or at least to my mental health.

How depressed or anxious was Stephen King when he was working on this story?

Being a writer, I understand the struggle. I was a misfit but in his case, what do I know? I lived under the stones. My path not just being a writer but as a kid and as a person was/is dark, depressing and confusing.

I have a world of my own inside my head that begged to be seen and heard. This little dark world linked art and creativity to my mental health and until I found the outlet to pave way for these heavy thoughts and emotions, (this blog)

Read also: How to Find your Passion and Live the Life of your Dreams

I was in a limbo.

In his case, I might be wrong but I am not googling his background and his inspiration to write this story to prove that I am right or wrong.

I was able to relate the movie’s theme to my anxiety attacks that’s why I felt a different kind of enligthenment towards the end of the movie.

And I am sure that if I didn’t experience anxiety attacks, depressive episodes, being broke, confusion, having low self-esteem, hitting rock bottom, wishing to end everything and extreme despair, I highly doubt if I will be able to see the movie from this perspective.

I suddenly wondered if Stephen King named the enemy “It” as a way of saying that mental health issues, fears and anxiety is so vague that it will make lives easier by giving it this short name?

And in referring to it by “It”, is it because most of the time we don’t really know what our issues exactly are? Does calling it “I” make these issues easier to refer to?

By naming it “It”, did he mean tackling a taboo topic by using “It” as a metaphor or even a euphimism would be more bearable, acceptable, relatable and as easier point of reference?

The group is called The Losers. These are the kids who didn’t make it to other kids’ list of cool people so they are the misfits. Having this feeling of being left out and no sense of belongingness especially when you’re in that age, leaves you with a low level of confidence.

I know because I also wanted to fit in and be other people’s definition of cool.

We all wanted to feel that we belong and that we
are accepted. We bring this until our adult years. It helps us explain why we behave in a certain way.

If this injured our inner child and it didn’t heal properly, it will affect every relationship we have and we will have. This inner child will always show itself in ways we wouldn’t be able to easily notice or even accept.

Our fears have deep roots because some of them were born during our childhood.

If I didn’t start my Life Purpose Certification Training Program, I wouldn’t be able to dig deeper and go as far back as my childhood.

And if we want to heal, we must be willing to look back to our histories no matter how ugly, disgusting, scary and painful it is because it is the only way.

“It” being our biggest issues, feeds on our fears and our unwillingness to face and attack it.

“It” as mental health issues will not die if we don’t want to kill it.

“It” will always be there ready to attack once it started sensing our vulnerabilities like mine when it started to attack while watching this movie and my thoughts suddenly started to shift to the future.

“What will happen if I can’t make a living out of my craft?” was my question. My “It” tried to steal my joy and my moments of hapiness
in being able to see the movie from a different angle and while holding the hand of the man that I love.

I didn’t want to further allow it to detruct me so I mentally tapped my face to focus on the movie to see and understand more.

The movie showed me a glimpse of reality. These fears can take away lives in the form of suicide.

The movie showed me that “It” can affect our grown up relationships and the choices we make as an adult.

The movie showed me how to fight guilt and how to forgive oneself by accepting the fact that we can’t save everyone. That we don’t have control over others’ choices, motivations and actions or even fate. We can only accept that we can only do so much.

The movie showed me that it is okay to seek help out and how having a strong support system can go a long way.

The movie showed me that moving on without knowing how and where to start is as brave. Taking the first step out of the dark with shaky and unsure steps is also beautiful.

The movie showed me that anxiety or any mental realted issues is an ugly, exaggerated, boring, overrated, a test of patience and annoying battle but you can win it. You just have to want to win and you have to want it so bad.

The movie showed me that even the deepest cuts heal and scars, if they didn’t fade, can be a physical proof of survival. It gives you a reminder of how much you’ve been through and how strong you are to withstand it.

The movie showed me that the end we fear could be the beginning we all wanted to have and what we needed. That having enough courage to admit that the only thing we feel is fear is already being brave. It is already a bold move.

“It” showed me that happiness is an option and the words the words we tell ourselves have the power to shape our minds.

And the most important thing I have learned, the next time my anxiety attacks, I will tell it “you’re just a clown with a heart full of
fears!”