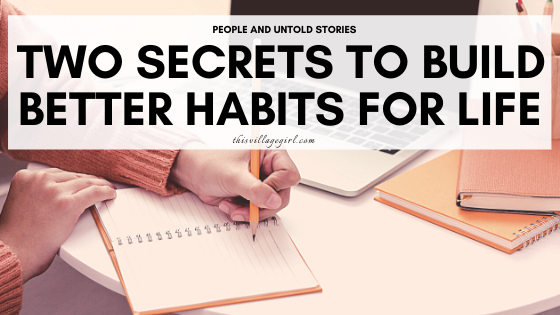 There’s loads of literature on how to effectively build and keep good habits and, yet, despite all of that information, they’re still slippery suckers — like that newly caught fish that wiggles its way out of your hands the moment you take it off the hook.

You can learn about all of the nuanced techniques to habit creation like using Creative Deliberate Practice, and the cognitive unconscious, and still be no closer to having a concrete habit than when you started.

But maybe there’s a good reason for that.

Maybe all of that literature and all of that information — while helpful — isn’t really needed after all. Maybe all you need to know about building good habits are two simple little secrets.

In this article I’m going to tell you exactly what those secrets are, and why they’re the only two things you need to know about building good habits.

How Do You Build A Wall?

If I told you to build a 20 foot tall and 10 foot wide wall right now, how would you do it?

There are various methods and techniques, but the point is that even the very thought of it is overwhelming for most people (that is, unless you’re in construction or have built walls before.)

A habit is exactly like a wall: big, intimidating, and extremely overwhelming if you’re the sole person tasked with building or destroying it.

Related Article: How To Be Productive and Build New Habits; 20 Experts Share Their Best Tips

Now, I’m no engineer, so I don’t know the first thing about design or weight distribution or whatever other mumbo jumbo is involved in building a wall. But I can confidently say that I do know how to build a wall and that the prospect of doing so is not at all intimidating.

The secret is that you don’t start with a wall.

In fact, don’t even think about the wall.

Instead, all you have to do is focus on the brick.

Focus on laying one brick at time; that’s all.

On and on you go until eventually, maybe even months or years later, you’ll finally realize that you have indeed built a wall.

Start Slow, Build as You Go

When it comes to habits we often get overeager and rush head-first into the process, and understandably so.

The prospect of a new and better life is just so damn exciting that we can’t wait to get started.

Related Article: The Exact 10 Steps I Took to Kill the Old Me: A Self-Reinvention

But this is the same as trying to build a wall instead of trying to lay a brick.

So when you’re building a new habit take a step back, and start slower and think smaller.

Instead of saying you will:

Try taking the one brick approach and commit to:

This is your first brick.

Next week you build upon this brick and lay the second one.

On and on you go until eventually you have your habit, your wall.

Now, there is some nuance as to why I chose those particular values for those habits that go beyond the scope of this article. But if you want to learn about them you can read: 5 Techniques to Build Good Habits For Life.

Before you even start laying your first brick, however, there’s one thing you should do first: examine your own hands.

This is the second secret to building good habits.

What do you see?

Are there callouses? A sign of work and strength. Or maybe your hands are soft and pristine, a sign of gentleness and an avoidance of manual labor. Neither is better than the other.

Related Article: 11 Things that Changed Since I Found Myself

How do they feel? Young and supple or clunky and arthritic?

Now, this is clearly a metaphor because the physical condition of your hands has very little do with building habits, unless that habit is crocheting or something like that.

When I say “the condition of yourself” I mean just that: who you are intrinsically or, put another way, your personality type.

What are your propensities and predilections?

This is so very important because much of the advice concerning productivity and habit building is very generalized, and it may or may not fit with your inherent personality type.

For example, the common suggestion to create a detailed to-do list might be very helpful for someone who struggles with organization and a lack of planning.

Related Article: Setting Intentions: How to Make it a Habit and Why

But for someone like me whose biggest weaknesses are being overly analytical and not taking enough action, creating another list is the last thing I should be doing.

Even the one brick approach may not be completely relevant to you. Perhaps you’re the type of person who has a large stress tolerance and likes to work hard and fast.

Related Article: How to Survive Depression and Live a Productive Life

In that case, laying two bricks at a time will actually be the most effective strategy for you to use.

Related Article: 10 Ways To Stop Yourself From Being a Slave To Your Emotions

As you ponder the inner workings of your own mind, remember that the process of self-discovery is not an easy one. It’s a long and arduous journey, and one that’s never truly over.

Related Article: 10 Serious Signs You are on the Wrong Path in Life

But there are tools that will make that journey easier.

Regardless, the more time you spend on that journey the more effective you’ll get at navigating the terrain, and thus the better you’ll be at building good habits.

Now that you know the two secrets: discovering yourself first and then laying one brick at a time, it’ll be easier than you ever thought possible for you to build your wall.

Alex is the creator of The Productive You where he shares research-based information, strategies, tools and tips to be the most productive you.

Maxim Dsouza on How He Landed Writing His Book